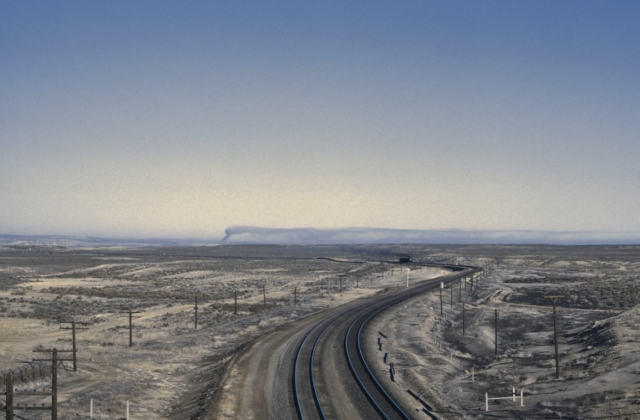 I and a railroad fan friend of mine burned some vacation time in Utah photographing the 1969 Gold Spike 100th. Anniversary celebration. The high-point for me was the daily run of the 8444 between Ogden and Salt Lake City. We spent a lot of time photographing locomotives being serviced at both the Ogden and Salt lake terminals including the 8444. One evening we were wandering around the inside of the Ogden roundhouse looking at the turbine locomotives and the 8444 on house steam when we were approached by a employee wearing bib overalls. He very politely asked who we were and what we were doing in the roundhouse. We told him we were railfans from California there for the Gold Spike party. We talked for a while and he told us he was the roundhouse Foreman and asked if we would like him to show us around. We said yes and the tour was on. He took us over to a GET locomotive and proceeded to explain how it worked. My friend and I were engineers, but trying to absorb what he was saying was like drinking from a fire hose. We ended the tour in the cab of the 8444 talking to the Foreman and listening to the 8444 creak and groan as it cooled down. By the end of the week we had developed an attachment to the 8444 and were not ready to leave, but we both had to be back at work the Monday next. Then we were told the 8444 was going to run light to Evanston in the morning (Saturday) and stop there overnight. The 8444 would continue running light to Green River for service and on to Cheyenne. We left for Evanston Saturday afternoon with the aim of chasing the 8444 to Green river on Sunday morning and then leave for home and work Monday morning. Needless to say, but we were late for work Monday.

I well remember the doom and gloom rumors concerning the dismal future of the 8444 when it returned to Cheyenne and I believed every word. By Sunday morning, I was convinced I would never see mainline steam locomotive operations again which served to make that morning very special to me. I remember standing on an overpass looking to the West for the telltale smoke and when I saw the smoke in the distance, I started taking pictures knowing full well the locomotive was too far away.These are the circumstances that led me to obtain the photograph of the last, lonely and soon to be vacated Union Pacific steam locomotive. This photograph sums my feelings that Sunday morning perfectly.

We all know the doom and gloom rumor was a fiction and today both the 844 and the 3985 are alive and well. I still like my photograph.

About THE OLD MACHINIST

I am 87 years old and married for 65 years. My wife passed away in 2016. I am a retired engineer and spent 35 years developing INS gyroscopes. I was a High School mentor in physics, a mountaineer, a model builder, a machinist and I have a degree in Physics. My interests include railroad history and photography, science history, cosmology, interesting people, and old engineering drawings. I place a high value on my friendships. I enjoyed my life and I am trying to look forward with a sense of anticipation and curiosity.
View all posts by THE OLD MACHINIST →
This entry was posted in HISTORICAL PICTURES, RAILROAD HISTORY IN PICTURES, RESTORED RAILROAD EQUIPMENT, STANDARD GAUGE RAILROADS, UPRR LOCOMOTIVE 8444, UPRR STEAM PROGRAM PICTURES. Bookmark the permalink.